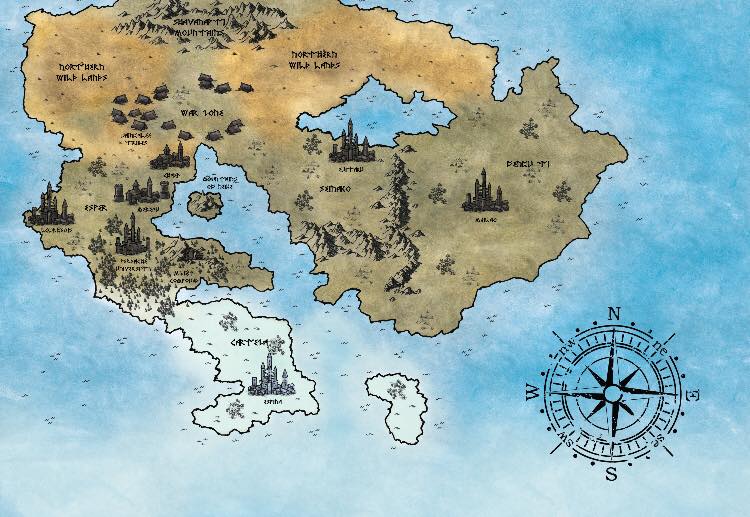 I’ve shared this map before, and I’ll do it again.  Why?  Because what you see here is the only reason I have a handle on where my series is going.  The definition of epic fantasy means that you have to create a world.  It’s some authors’ strength, and others’ weakness.  Either way, it’s necessary.

If you only have one nation that your book focuses on, you can get deluded into thinking you don’t need a map.  But, here’s the thing… your world simply won’t real the readers in.  When I mention different cities in the real world, readers instantly can picture something.  If they’re unfamiliar with the city, it’s pictures they’ve seen online.  If they’ve been there, they can even imagine the city’s smells, humidity, and general ‘feel’ that is hard to convey in writing.

For example, Hero Status by Kristen Brand takes place in Miami.  Instantly, she’s already half way through her description simply by telling you the city.  Palm trees, salty air from the ocean, sweat-inducing humidity, sun so bright you’re still squinting with sunglasses on.  Then there’s the fact that her protagonist Dave is Hispanic, so you get glimpses into the predominating culture of the area.

Now, if I mention Mereu… nothing comes to your mind.  Why?  Because it’s a city in my world for this series.  You have no predispositions about it.  I have to describe everything from the ground up.  That city is very important for one of my minor characters, Rutley, and I know that he’ll be spending more time there as the series goes on.  It shapes him.

Where your characters come from, where they would go if the chaos of your plot didn’t get in the way… all of that is important.  Even if not all of the information comes up, you should have your map written down.  Before I had it professionally created, I had a rough sketch that I used as I was writing.  It reminded me of all the possibilities of where my characters could go.

With every book in my series, a new country (sometimes more than one) is added into the thick of the plot.  I already know everything about the culture of every place I will ever mention.  Why is this important?  Foreshadowing.

I feel like I’m rambling, even though this blog post isn’t that long yet.  I just want to leave you with this message: in this world, you can type into the GPS of your phone and go wherever you want.  In the fictional world you create, it’s up to you to make that a journey for your reader rather than a ‘trip from Point A to Point B’ (aka your plot points).  Take the time.  Build your world.  It’ll help built your characters and your plot.

To say it’s harder than it looks would be an understatement.  Your story is more dependent on it than you think, especially in both fantasy and science fiction.  You have world that are so complex like in Game of Thrones, more simple and based on this world like Harry Potter, and then complete universes like in Star Wars or Star Trek.  It’s always so beautiful to watch how the setting influences the characters.  But, how do you build it from the beginning?

Ironically, much the same as you do a book.

Outline the big stuff.  Is it all in one country?  Several?  Know where they are in relation to one another as far as north, west, east, south.  Simple enough, right?  Next step is to put that into Microsoft Excel.  Set each country 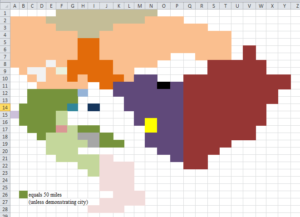 to a different color, and put a key to the right accordingly.  (I’ve put a picture as reference from my latest book for what I mean as far as using Excel, minus the key.  I don’t mean to have it so detailed and laid out in the beginning.)  This outline should be completed while you are outline your main plot.

Once you have your basic outline of the main plot points (Again, I’m going to have to suggest Structuring Your Novel by K.M. Weiland if you’re having problems.), then it’s time to delve into the culture.  If you already have a clear image of your characters in mind, this part should’ve technically been at least part way done.   Now it’s time to go more into detail.  Make sure to put sub-races within the same culture.  Look at America, Germany, France.  There’s people of every skin tone.  If your culture is ‘pure’ like the Japanese, why?

Do they celebrate religious holidays?  What different classes does it compromise of?  How is violence looked at?  Gender equality?  Religion?  Liberal or conservative?  Monarchy, democracy, anarchy?  Animal life?  What’s their main source of food?  What’s the weather like there?  How does that affect your plot?  What’s their take on honor?  What do the buildings look like?  How do they view art?  Do they have their own language?  What type of job does a ‘commoner’ have?  What sports do they play?  All of this might not make it to your book, but nonetheless it works in your favor to show a well-rounded nation.

Now that you have your outline, time to go into the subplots.  If you already have some in mind, how’s your map effected?  Do you need to put in mountains?  A lake?  River?  Sea?  If you’re struggling with creating subplots, refer to the last paragraph.  If it’s all within one or two nations, delve more into it.  How could the answers you come up with affect your protagonist?  If you’re going across many countries, create a whole new one.  Make it drastically different than your protagonist.  What’s the worst type of culture they could stumble upon?  Now, create it and add it into your map.

Look at your excel sheet.  Think about natural geography.  What’s missing?  Add it.

Once that’s complete, look at the new countries you’ve created.  How do they affect your general plot?  If there’s a war, why aren’t they helping?  Could they help?  How would that change things?  What’s their relationship like with the surrounding countries?

RT @GlennonDoyle: God I love a woman who will abandon the world's expectations before she'll ever abandon herself. Simone Biles is a goddam…
h J R
JE_Brand

Yesterday I spent 5 hours getting my 1st dose of medicine via infusion. BUT I used the time to read from cover to c… https://t.co/uz2Usjo9TT
h J R