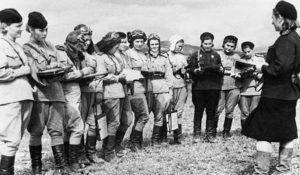 On October 8, 1941, Stalin gave orders to deploy three all-female air force units.  They followed twelve commandments, the first being “be proud you are a woman.”  However, the women were given the oldest and noisiest airplanes.  Their engines would conk out halfway through their missions so that the women would have to climb out on the wings midflight to restart the propellers.  The planes were so noisy that to stop the Germans from hearing them, they’d climb up to a certain height, coast down to German positions, drop their bombs, and then quickly flee.  The women would fly in groups of three airplanes at night, with two of them acting as ‘spotlights’ and distracting the German planes while the third cut off their engines and then quickly coast down to drop their bombs.  The only noise this action was make was a “whoosh” that the Germans compared to the sound of a witch’s broomstick.  This, combined with their nocturnal attack times, led the Germans to give them the name “Night Witches”.  Additionally, once they learned that the successful Russian air teams were made entirely of women they reasoned two possibilities: (a) the women were a group of criminals and thieves forced to fight on the front as punishment, and were used to killing or (b) they had been injected with some secret serum that gave them the ability to see in the dark.

In addition to the terrible engines, their airplanes also had limited weight

capacity and their funding was given very low priority.  This meant that they lacked “luxury items” that their mile counterparts used, including: parachutes, radar, guns and radios.  They were instead given rulers, stopwatches, flashlights, pencils, maps and compasses.   This didn’t stop their success on the front, though, as their leader flew over 200 missions and was never captured.

In The Witch’s March, what kind of urban fantasy war female author would I be if I didn’t include such a powerful group of Allied women that did so much for their country and the war who are SO aptly named?!  In my series, Rada Medved is a Night Witch who also happens to be an actual witch.